In 1964, Will Almendinger opened his first Christmas tree lot on a street corner in Robbinsdale, Minnesota to support his way through college. He named the tree lot “Willy’s Wonderland” and sold cultured scotch pine, norway pine, and wild balsam that he cut near his boyhood home in northern Minnesota.

Will married his high school sweetheart, Kathy, in 1963, and throughout the late ’60s and early ’70s, “Willy’s Wonderland” expanded to include multiple Christmas tree lots across the northern metropolitan area. To assist with the retail operation, Will went into partnership with his brother, Russ Almendinger, and brother-in-law, Charlie Edling. “Willy’s Wonderland” was now a family affair.

With the new change in ownership, the three partners decided to change the name of their retail lot operation to “Premium Quality Trees.” They used this name until a cold December night in 1973 when an elderly lady wanted to pay for a $10 scotch pine with a frozen pen. With dwindling ink, she asked if she could make her check out to PQT for short. From that day forward, we would be known as PQT Company.

In 1974, Will, Russ, and Charlie incorporated PQT Company and planted their first field of trees. The plantation consisted of Scotch Pine, Norway Pine, White Pine, and Balsam Fir. It was their goal to grow enough trees to supply the retail lots, so a second plantation was purchased and planted the next year.

As the trees grew, they found themselves in a dilemma – they had more trees ready for the market than they could sell at their retail lots. So, Will and Russ Almendinger set out to cultivate new wholesale accounts. They called on nurseries and independent retailers in the midwest to sell their excess trees. They also worked at establishing new retailers for fundraising events for charities, churches, Boy Scouts, and other organizations. The brothers were able to use their many years of retailing experience to help new customers display the trees and manage a profitable Christmas tree lot.

In the 1980s, the partners at PQT opened their first two cut-your-own farms – the Stacy Tree Farm in Stacy, Minnesota, and Rum River Tree Farm in Oak Grove. A few years later, they added a third farm, Hampton Hills, to serve their customers in the southeast metro area.

As the wholesale portion of the company started to grow, the office headquarters of PQT Company moved into the lower level of Charlie Edling’s house in 1987. Though cramped, the growing PQT Company would use his 5-acre lot and rent the adjoining 10 acres as their distribution center for the next nine years, shipping trees all across the United States, Mexico, and Canada. As the company continued to grow, the need for more room became increasingly apparent. In 1996, PQT Company built an office and warehouse on their Rum River farm in Oak Grove.

Today, Rum River Tree Farm is a full-service nursery and landscaping company, offering a full line of trees, evergreens, shrubs, annuals, perennials, roses, and landscape supplies. Although the original three owners have now retired, Will Almendinger lives on “the back 40” and still remains active in the company. His son, Dan Almendinger, carries on the family business, along with several longtime and dedicated employees.

For nearly 50 years, Rum River Tree Farm has strived to put quality first, offering premium products at a competitive price. We thank you for your past business and hope we have the opportunity to serve you again in the future!

Keep up to date with our hours and specials 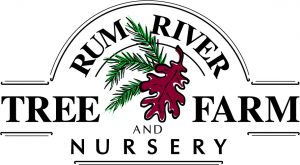